There have been a few issues lately with people unaware of web etiquette, so I've decided to pop on my Miss Manners pinafore and write a little guide on the best way to behave on here, and across the wider internet. I warn you however, irony, sarcasm and cynicism are all allowed under netiquette rules and I will abuse that loophole...

Please note that for most of our members this will be superflous, the majority of folks on our site are wonderful people and don't go against most of these rules... but enough of the niceness, it makes my head hurt, on with the rules!

1) Don't SHOUT! This has to be number one, it's been an increasing problem lately and people seem a bit touchy when it's brought up, so I'm going to just lay it on the table and say what everyone is thinking. If you write ALL IN CAPS then people reading your words think you are an idiot.

There, I said it.

I've seen reasons ranging from "I see better in caps" (ctrl + mousewheel= larger font) to "I can't be bothered using shift to capitalise the beginning of my sentences" (use all lower case, people will think you're silly but it's more acceptable).

Before you write all in caps, take a moment to think of how this is appearing to others. If I'm at a dinner party having a worthwhile debate on important subjects such as politics, sports, the world fuel crisis or which of the catering staff I would (the fuller figured brunette every time) the last thing I'm expecting is someone to enter the debate by SHOUTING IN MY EAR!

Think about it, if someone comes up to you in the street and shouts loudly into your ear from 6 inches away, what do you think? Yep, you think "idiot".

There is a time and place for shouting and, unless Frontierville has invaded your computer, emptied your bank account and run off with your daughter, an online game is unlikely to be that time, or that place.

Write all in caps and 99% of the internet will ignore you and think you are... I'll let you all finish that one off yourselves.

2) Abuse, insults and personal attacks. No, just no. Do I even have to explain this one? Even I will refrain from downright insulting someone on the page and I'm a sarcastic git.

3) Online bullying. The biggest cause of online bullying is people taking the game too seriously and falling into the experienced player/newbie trap. Just because you've played the game for longer, it's not a superior status. I've been trapped in groups before when the long-term players, though arrogance or a desire to keep their "special" status have been so condescending and patronising to newbies that they've fled.

The basic rule of this page is we don't really give a gnat's left private part whether the person posting is level 100 or level 1. Everybody deserves a good gaming experience, everyone deserves help and support that doesn't make them feel like an idiot. Unless they SHOUT. Then they are.

4) Do not feed the trolls. If you don't know the terminology, trolls are people online who are out to cause mischief. They post inflammatory remarks, attempt to start flame wars and generally become annoying for the sake of it. Nobody knows where they come from (there are rumours it's an unsuccessful project trying to breed Mel Gibson and Barbera Streisand) or why they do what they do (a small gene pool and a lack of life are the most likely) but they are around, they are on the net and they do flourish when fed.

If someone on the page is just generally being a bit of a "merchant-banker" just ignore them, comment around them and never, EVER feed the trolls... especially after midnight because then they mutate into the most useless of all internet lifeforms, YouTube commenters.

5) Read the wall/posts a little before posting. Even the most patient, caring and polite of people (and obviously I'm not talking about me here) will find it vexatious to get three posts in a row on the wall asking the same question, "Is *insert latest glitch here* a known problem" when the post below had already answered that yes, yes it is.

Take the time to scan at least the first page of posts, if it's not there then it might well be worth repeating that the problem is active, but if a moments scrolling finds the answer, add to that post.

Also remember to expand the comment thread, with only two comments visible once there are more than three your query or point may well have been added before.

6) Don't be THAT person... I think everyone here knows what I mean. When someone sees your avatar and starts thinking night vision goggles and a map detailing their favourite dining establishments, this is commonly known as A Bad Thing.

7) Take in your surroundings. Have a look at what others are saying or posting and where. We tend to have no outright profanity or anything that would give a Victorian Lady an "attack of the vapours". Considering the subject matter and the FTV designers love of double entendres and what I call "Carry On Humour" (might only be Brits that get that...) we do allow the occasional moment of "oooh matron" humour and innuendo but I'd like to think the site is pretty family friendly.

Always keep in mind Facebook's minimum age limit is 13 and this is a game, although most of the people are adults some aren't.

Also look at where things are, generally it's help and humour on the wall, add me's and trades in the discussion boards. Always note when moving around the net what goes where and try not to become the online equivalent of a houseguest who moves the ketchup from the fridge to the cupboard or vice versa.

It's a good rule not just for this page but all over the net, let the people already there guide you and read the quick info bits of the page before jumping in, even though our info section specifically states we aren't Zynga, well, if I had a quid for ever time someone thought I was? I'd have at least £7.50.

8) Understand that we're all human, even Zynga. This one might well be controversial but here goes nothing. I have a life rule for my real life interaction and my online interaction; we're human, we make mistakes, deal with it.

I will make mistakes. You, yes YOU reading this right now, will make a mistake. Zynga will make... well, a number of mistakes but there are many people there so if we count them as per-person it's not actually that many... So cut everyone a bit of slack, explain politely any errors or allow Zynga some time to fix the problems without things getting a bit... *axe through door* Heeeeeeeere's Johnny...

9) Time is precious. If you post something up, give other members and the admins time to react. Just the other day I saw an admin suggest they were going to put up a contest then be pulled away. Inside 10-15 minutes people were actually posting on the wall and trying to hurry it up. I've seen people post problems then comment if it hasn't been answered inside 20 minutes or so.

None of us are here as a living or sat on the board 24/7, there will be times when people aren't around to answer your query or post a link up. Unfortunately the internet has become almost instantaneous, we're used to getting what we want as quickly as Google can search for it, but that's when things are automated, when it's people involved there may be a break in play or a wait. It's unfortunate and I can promise I get impatient VERY quickly at times but sometimes we all need to think... "I'll give it another half hour".

10) Keep on topic and fight negativity. Before you comment on something, see if it's really relevant to the subject. If someone posts something funny, or a contest, or a picture of their homestead, there isn't the place to complain about the latest Zynga glitch or problem. We have the rest of the wall for that and you're more than welcome to add to a post about glitches or even write your own, but each thread should be kept on topic.

Also, if someone is trying to lighten the mood with something funny, don't be the downer, don't be the person who plays a sad song at a wedding... Sometimes what we all need is a bit of light-heartedness to get us through what is, basically, a game.

So if someone posts a jokey screengrab or laughs about something silly that happened in game, try not to come on just to say "at least you can get on" or "I'd love to see that, but some of us are still locked out..." it's not polite to go on a glitch thread and boast your game is going perfectly, so if you shouldn't be an upper in a down thread you sure as heck shouldn't be a downer in an up thread.

11) No cheating. No Horseshoe links, no cheat pages, no grab bars or automated bonus checkers. Nobody likes a cheater and it will mean a swift and permanent boot up the backside from an admin, we all get given a special pair of extra reinforced hobnail-studded steel toe-capped booting boots when joining up and we're not afraid to use them.

It's a game for pity's sake, one with no prizes and no world status (I don't think we'll see any televised Frontiering contests any time soon). If you feel the need to use cheats and outside assistance then it might be time to get a small bank loan and try to get a life.

12) No flooding. Thankfully we see very little of this which is why it's the last in the list. Flooding is repeating yourself, either by posting the same thing again or again or by commenting the same text on all wall posts or discussion boards regardless of content. You may have an axe to grind and want everyone to complain to Zynga... but we don't need to hear about it 20 times.

You know the annoying git in the office who keeps asking again and again for you to vote up his YouTube video of his cat playing with an X-Box controller? This is that guy.

Basically this can all be rounded up in two sentences (so hey, you didn't need to read the rest, but then you would have missed my sarcasm...)

Treat online like real life, act how you would to people in the street, in the pub, in your family. If you find yourself acting in a way online you wouldn't in real life then change how you act online... (Unless you act nicely online, and like a sod in real life, then take a good look at yourself...) 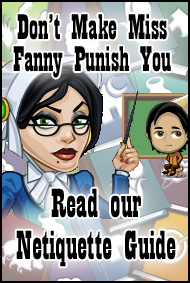